New to me machine 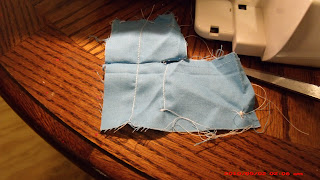 Hi friends!
Son in law called Monday and said he was cleaning out a house and wanted to bring me a sewing machine he found. He had asked the lady that owned the house if she wanted it and she said" carry it to the dump!"
He brought it by when he got off work yesterday! 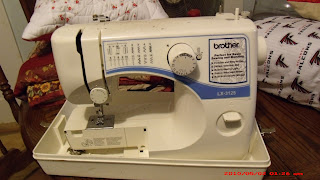 It's one of the cheap lines of brother but it's heavy which means their is metal in it . No one had lived in the house for 10 years that he is remodeling so it has to be older than that.
She runs like a top, great seams. At first the needle wouldn't go up and down but the rewinder was pushed over. A little rust but not bad, We oiled her after i found a site with all it's info. It has been discontinued . Wonder how long they take to quilt making them like that? 10 Years? 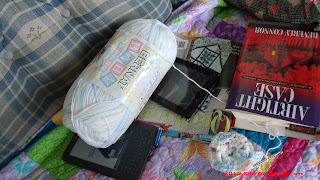 I started a baby blanket yesterday!  The wind got up before the storms last night and knock our power off for nearly a hour so i crocheted. 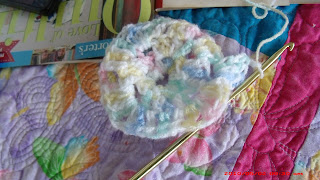 Big start!!!
Have a good one
Hugs
Quilt Happy
Posted by barbara woods at 12:07 PM

What a cute machine. Love the arch in it. Sometimes I wished I had kept my old machine. It was nice and heavy as well.

You are so lucky - that is a great machine and a wonderful son.

Very nice of your son in law to think of you. Cute machine. Live the colours in your yarn.

Yay!! you got a new machine and saved it from the dump!! Win-win. We worry when the wind blows hard. We have electric heat so if it's out too long in the winter we freeze. I hate to think about the time it was out for a week due to an ice storm in January.
xx, Carol

How cool to have an "extra" machine.